History of the Lake Chelan Yacht Club 1932 to… 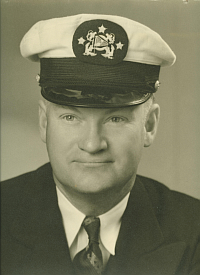 1930’s At a meeting held May 26, 1930 at the Totem, Pole Restaurant, North of Entiat on the Columbia River Highway, about 40 boating enthusiasts formed what is known as the “Lake Chelan Yacht Club”, with Bruce McKinstry elected as the first Commodore.

Committees were appointed to draw up by-laws and get necessary data underway as a regularly organized yacht club. In June 1931, George Miller was elected commodore. During this year a great deal was accomplished toward building docks in the various harbors up the lake.

The club was incorporated on July 7, 1932 with Jim Reed of Chelan elected commodore, and the time of the annual meeting changed to March. At this time the members felt they should secure property along the lake for proper quarters and purchased a mile of waterfront property above Granite Falls. The club acknowledged a debt of gratitude to Robert Vogler for making it possible for the club to acquire the Granite Falls property from Chelan Electric Company for the sum of $500, so small an amount that it was considered a donation.

During the depression years our present club building was an open dance hall known as the Elmore Dance Pavilion. Hard times had forced the pavilion to close. Josh Green Sr. was in the Green-Davis Security Company in Seattle, who had a mortgage on the Elmore Property. This piece of property contained 30 acres of ground and 250 feet of waterfront and a building suitable to be made into a good club house. The club acknowledged a debt of gratitude to Andrew Kennedy for his help in the exchange of the Granite Falls property for the present Hollywood Beach property, and to the House and Grounds Committee, George F. Miller, C.C. Warren and A.A. Bousquet, who handled both transactions for the club with no money exchanged, one month later August 1932.

The story told was that two months after the trade, Mr. Green sent his manager to look over the property that the bank had acquired in the trade and he went back and told Mr. Green that in all fairness, the Yacht Club should have thrown a mountain goat in with the deal.

Charles C. Warren was elected Commodore for 1933. During that year the 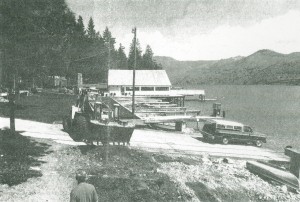 club grounds and buildings were greatly improved and a lighting plant installed on the club grounds. Dances were held every two weeks during the summer months for a fee of $1.00 per couple. The membership of 200 was filled and fourteen applications for membership were on the waiting list. The initiation fee was $7.50 and the annual dues were $2.50. This was the first year of the Regatta and Harold Feil won the LCYC cup plus the Past Commodores Cup.

On March 5, 1934, R.J. Vogler was elected Commodore. During this year many notable achievements were accomplished. Log siding and windows were placed on the exterior of the clubhouse. Mr. Vogler stated that has to be done in order to protect the dance floor, which still had the original dance floor. A large room was added on the shore side of the club house. This room contains the large stone fireplace. Also this was the year the Lake Chelan annual book was started.

Under the direction of Commodore C. Neilson Nicholson in 1935, a large dock and log breakwater was installed in front of the club house. Benches were installed in the dance hall and the old road at the rear of the clubhouse was vacated and another plot of land was acquired. Some members built there own cabins which were later torn down. Only the present Managers cabin was left intact and later improved a number of times.

During these years, and even later, money was short and members donated materials to continue progress. A.A. Bousquet was elected Commodore for the year 1936 and the walls and ceiling of the lounge room were finished in pecky pine. Lawn and shade trees were planted, pilings were driven with boom logs attached making a large compound for the boats in stormy weather. A new road was built into….

[read the complete history as written by Jo Anne Polson 1985]